Quote
“Multiple sources tell me that the Astros have spent more money on the hardware hooked up in Minute Maid Park than other teams spend on their entire player development department in a year. Every team has Trackman, a radar-based technology that produces real-time movement statistics while tracking the movement of each player — but the Astros have enough high-speed, high-definition cameras capturing video of each of those movements for biomechanics analysis to make most player development directors blush.”

When we tried to find out the size of each team’s research and development department earlier this year, we sensed this growing gap in spending when it comes to analysis — the backbone for not only player evaluation and in-game tactics, but player development as well. 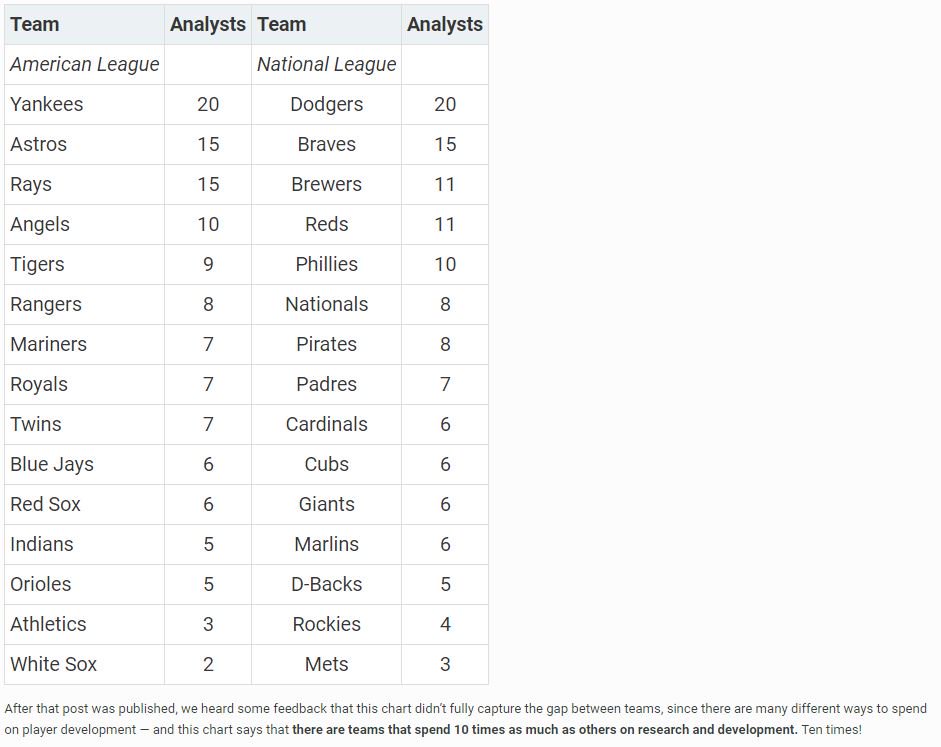 Quote
“As you can probably guess, the coaching staff is considered the nexus of this renewed emphasis and investment in developing the best players. Maybe it’s no surprise, then, that the average tenure of today’s hitting coach — 1.4 years — is lower than it’s been at any time in the last 10 years. Things are changing when it comes to getting most out of players, and the major league staff needs to change, too.”

Quote
“Though the best hitting coaches don’t always noticeably move the needle when it comes to observable results, if you look at what their hitters have accomplished compared to their projections, you still see a significant change. Russel Carleton found that they can change the tendency of a team to reach at pitches outside the strike zone, and if you look at the 55 coaches that have worked with at least 25 qualified batters, a trend emerges. The best hitting coaches can add a few points of OPS against projections by getting their hitters to reach less.”

Because you surely want to see who’s the best, here are the top 10 hitting coaches in our sample.

This will set up an interesting dynamic in Baltimore. We have one of the smallest player development systems in the game. On the other hand, Houston was one of the industry leaders and I’m hopeful that Mike and Sid will bring some of that to Baltimore. It’s interesting to note by one notable metric, Scott Coolbaugh is one of the top hitting coaches in baseball.